Here are some thoughts after listening to her interview. If you had read any or all of the material on this blog and still have any doubts that Ken Andersen did NOT shoot and kill Chad Swedberg, listening to these taped interviews should remove them. There is a large difference between what was said the day and the days after Chad was murdered. By the time of Ken’s trial the police had rehearsed these people into saying a much different narrative than what you will hear on these recordings. The main thing missing is any talk that Ken Andersen had any reason, opportunity, or inclination to have murdered his best friend. So, who did the crime? I really believe the one or ones who were involved are on these tapes. 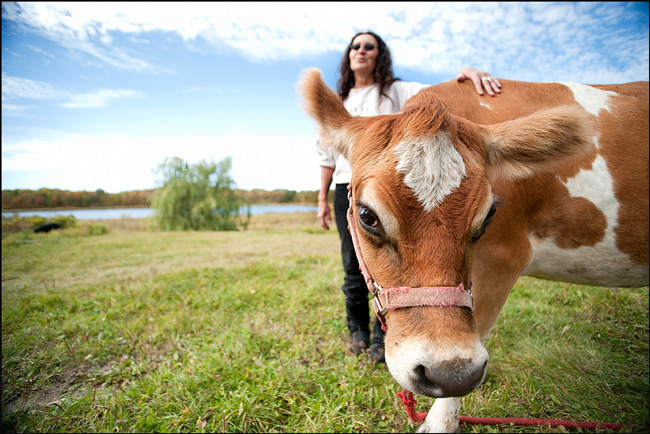 This interview took place on April 13, 2007, the same day her husband was killed. Yet, her voice sounds normal and quite a contrast to what they are discussing. Dan Bauman ask her questions about the events only hours before in the same day of things that would be hard to ever forget, yet she can not remember what time she got up that morning. Leslie tells them Chad was watching some show about wolves and didn’t want to stop. Her rather vague account gives the time Chad left the house to go to work at the maple stand at 8:30 am, even though later the police would tell us he had a standing appointment with Al Baker at 8 am. at the stand. She seems sure she heard two blasts from a gun she refers to as “shotgun blasts” several times. All the other witnesses simply calls them gun shots, so I have to wonder how well her discernment of the sounds different guns make to know it was from a shot-gun (it wasn’t).  She thought it might be someone shooting a bear at first and then began the many calls to Chad that were never answered. Remaining unconcerned as she chatted on the internet and got ready for work. Finally, she goes to check on her husband as his phone is still not answering, she hears dogs barking and a mysterious “rattling” may be from a person, and finds Chad laying on his back with his legs askew. She declares he seems to have dead for a while, and begins to think about calling 911, but decides against it. She says they wouldn’t know where she is and decides to call Chad’s brother, Ken. The police never checked to verify much of this story, such as the TV show or whether Chad’s phone did not have voicemail.

This entire interview last almost on hour and left me feeling odd from the huge holes in her story. Couple this interview with her writing a check to double their life insurance that same day, and you come away with the feeling this woman is not telling the whole story here. Reasonable doubt? You bet. Come back next Monday for another installment.

View all posts by johnkbucher