A new podcast will begin broadcasting on August 1. This is a weekly podcast that will feature Ken Andersen calling in from prison to tell what happened on April 13, 2007. It will also consist of the police recorded interviews the days after Chad Swedberg was murdered. You will hear details that the courts do not want to acknowledge. New evidence will be presented that continues to reveal Ken Andersen was wrongly convicted. The link to listen to every epsiode was they are released will be available on this blog.

Ken Andersen communicated with me over the weekend and here are some of the things he had to say: “John, at the hearing the judge wanted to know if my issues in my petition were actually new evidence and if they were, would it get me past the clear and convincing standard of actual innocence which is needed to even have my petition heard. The state said I should have known about the bullet casings at the crime scene as early as late 2014. As such, I only had until late 2016 to use due diligence to find them and file my petition. From time to time an issue can be reasonably raised in a two year period. File after that time, it will be time barred unless you meet some exceptions or the interest of justice requires it to be reviewed. Zach (his lawyer) knew my facts about issues and made a very compelling argument and backed it up with some case law that supported my petition. Essentially he told the judge if you outright deny my petition without holding a hearing he would be abusing the court’s discretion and based on a MN-S-Court’s ruling in State V Wilson, it will get reversed. The judge took a few minutes and asked Zach if he thought we would be able to get my hearing done in a day? Zach thought we could. Long story short, by the judge’s tone and words it very much appeared he was granting my evidentiary hearing. After that I said some things about the missing police reports, cig butts, etc. The judge said would take our arguments under advisement and issue an order. At best he has 90 days to make that ruling. While walking back to my unit, my caseworker (who was sitting in on the hearing) told me that it appeared I was getting a new hearing. All in all, I feel Zach did great and I feel good about the hearing.”

More when I get any updates.

This past week Ken’s attorney filed a new petition in court with new evidence and more proof Ken Andersen is innocent and should be granted a fair trial with ALL of evidence shown to a jury of his PEERS. Read the proof for yourself:

I spoke with Ken Andersen today on the phone and he was emotional and down, as this is the anniversary of the death of his friend, Chad Swedberg. They were business partners and close friends even up to the day Chad was killed. Ken was wrongly convicted of his death and is serving a life sentence. That doesn’t change the fact Ken still grieves over the loss of his best friend. There is an old Native custom of putting tobacco outside to honor the memory of the departed. Ken asked me to post this and ask as many of you as possible to do this to remember Chad and his life. I would ask you to also remember that the wrong person was punished for this crime and the true killer is still out there, enjoying life, getting away with a murder.

2018 closed with Ken Andersen still wrongfully imprisoned for a crime he did not commit. However, 2018 saw the state of Minnesota granting Ken a new hearing and new evidence was introduced to prove he is innocent. He is currently awaiting the Judge to rule on the following petitions. Of course, the state’s argument is that their theory and the mislead jury is infallible and anything else is a lie. Here’s the entire proceeding. Take the time and see for yourself.petitioner’s post-hearing memorandum

On Tuesday of this week, Ken Andersen appeared back in court to introduce new evidence that he is innocent of the crime of murder. I spoke with him on the phone Wednesday, and Ken thinks the hearing went very well. He and his attorney, were able to bring to light many new facts that add to a pile of evidence he is not the person responsible for Chad Swedberg’s murder.

This is a long process and very difficult to accomplish. If any of you are watching season 2 of Netflix’s “Making of a Murderer”, it is easy to have reasonable doubt either of those men committed that crime. In spite of a world wide audience that is convinced of their innocence, they both remain imprisoned. Ken’s situation is no different. Many people want to always give law enforcement the benefit of the doubt, and this is what occurs when all they desire is a conviction at any cost.

Ken outlined the process that is happening now, and believes he should hear an ultimate ruling in about five months. The media was mostly silent this week, except for Kevin Wallevand, at Channel Six in Fargo. Here is the interview he gave with Ken’s mother, Geraldine Bellanger. 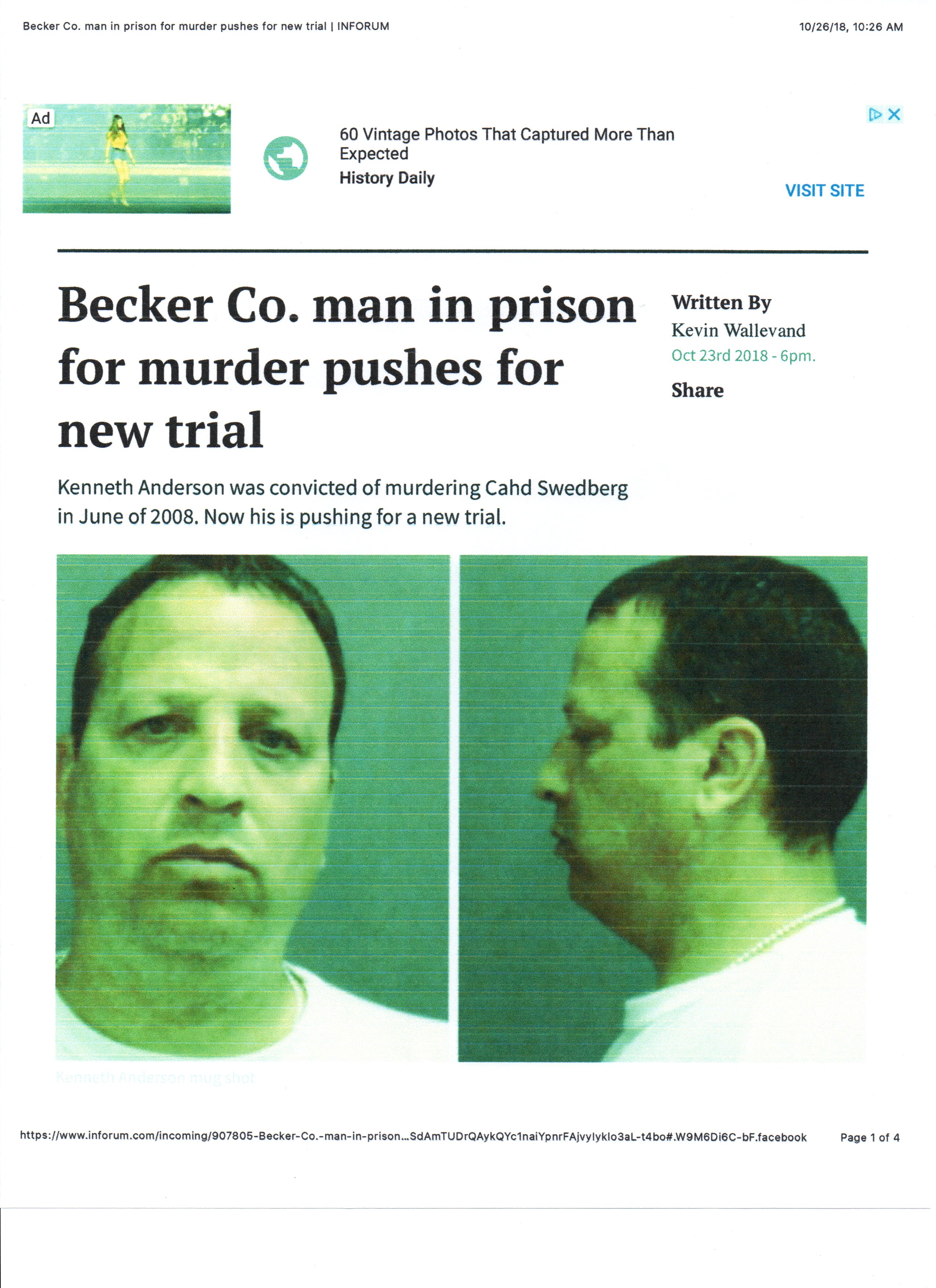 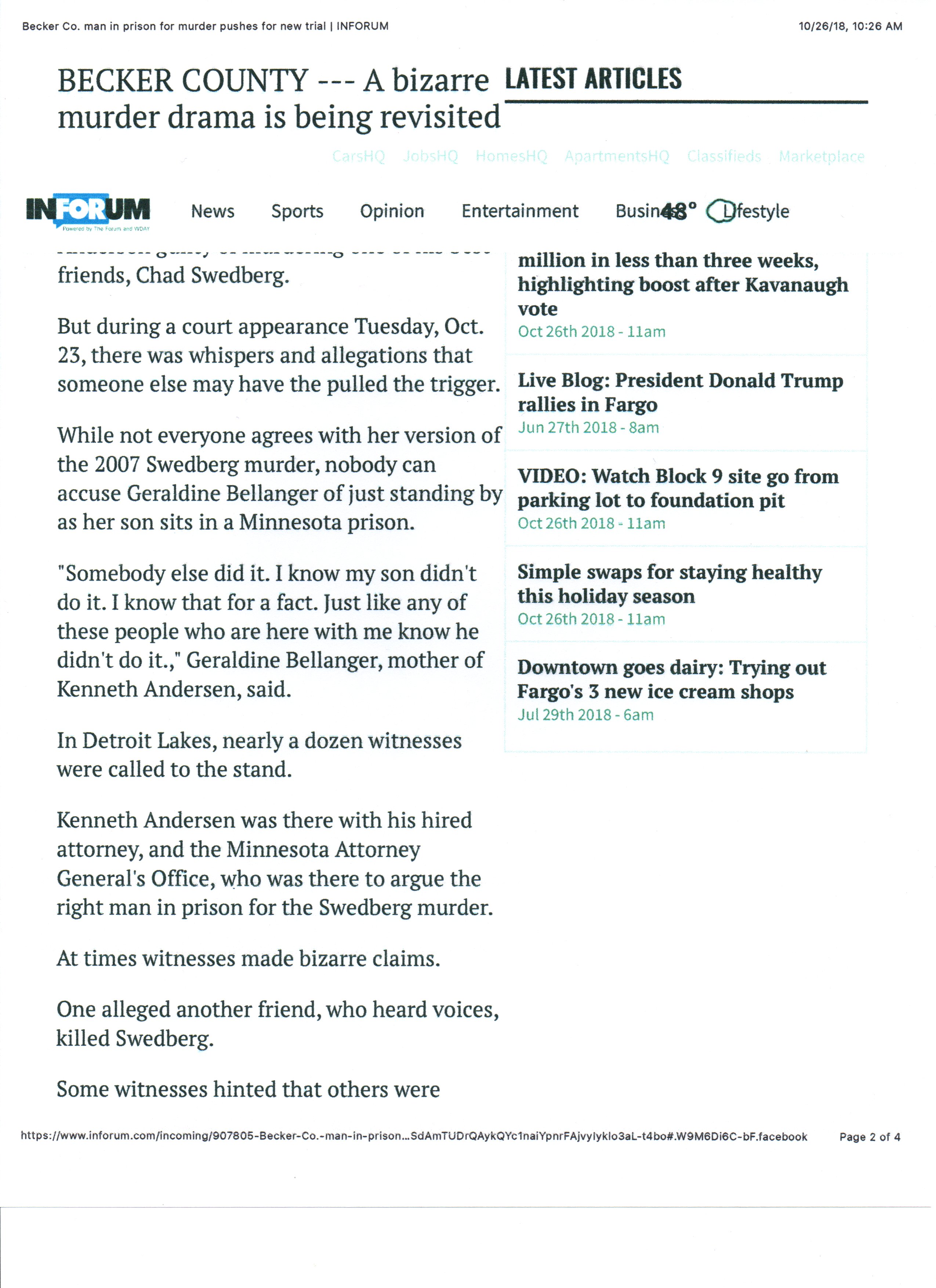 On October 23, 2018, a court will hear and render a decision, after hearing evidence that Ken Andersen is not guilty of the murder of Chad Swedberg. Let us pray that this leads to Ken’s freedom and exoneration. The sad part will be that the authorities got the wrong person and allowed the murderer to go free. Here is the order for a new hearing.

Kenneth Andersen’s latest petition asking the court to at least READ his list of defects of his wrongful conviction and new evidence that was not known when Becker County railroaded him into a life sentence for a crime he did not commit, will appear before the court on December 5, 2017. 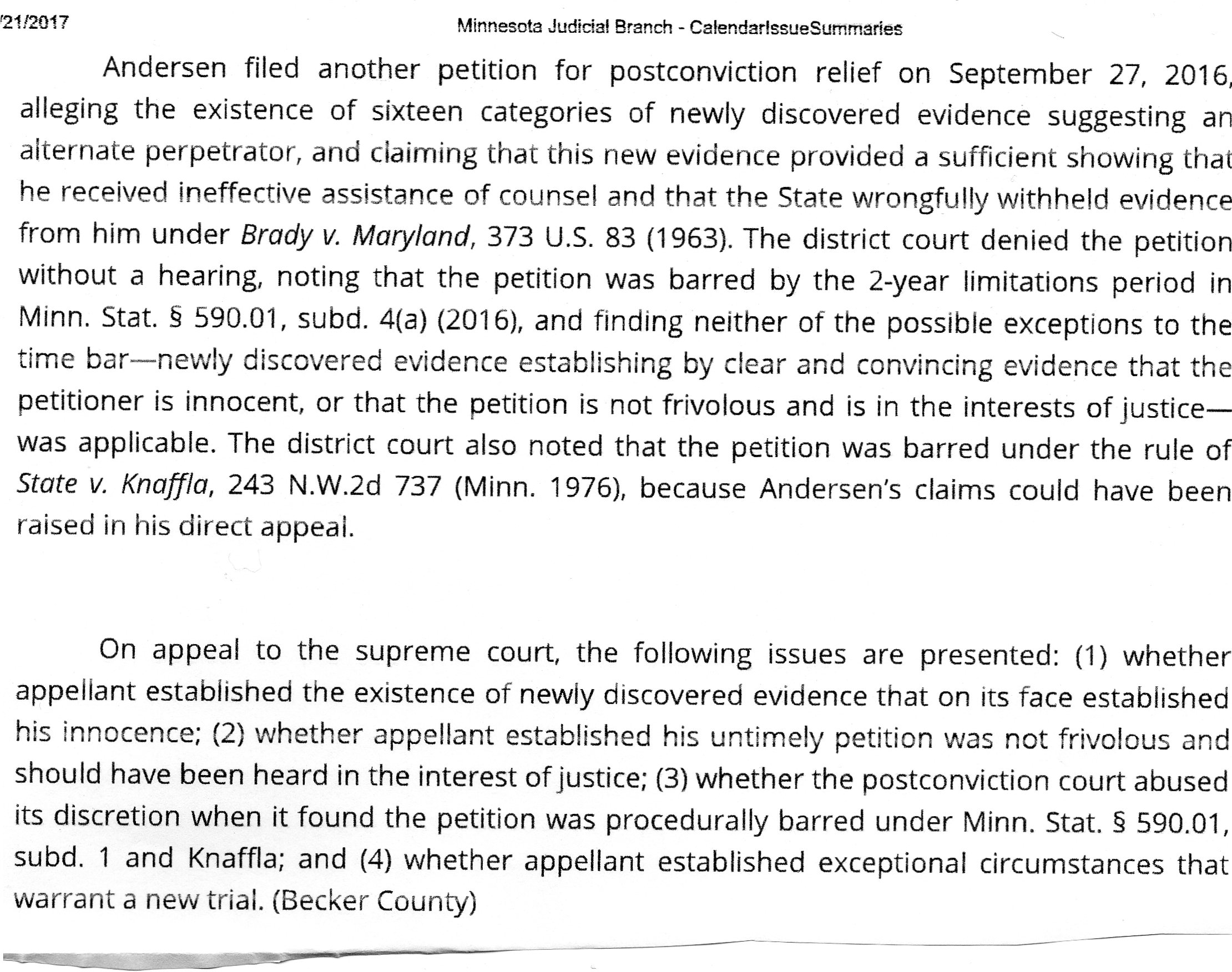