I spoke with Ken Andersen today on the phone and he was emotional and down, as this is the anniversary of the death of his friend, Chad Swedberg. They were business partners and close friends even up to the day Chad was killed. Ken was wrongly convicted of his death and is serving a life sentence. That doesn’t change the fact Ken still grieves over the loss of his best friend. There is an old Native custom of putting tobacco outside to honor the memory of the departed. Ken asked me to post this and ask as many of you as possible to do this to remember Chad and his life. I would ask you to also remember that the wrong person was punished for this crime and the true killer is still out there, enjoying life, getting away with a murder.

This sad story has always begun and ended with Leslie Fain. She is the one who first reported her husband’s death and called 911. She was the first story investigator’s talked to and gave them them her opinion of her and Chad’s life. The following pages show how she didn’t like Kenneth and Lisa Swedberg, how she admits the stress Chad was under with her own family crowding into live at their house, and how she worried Chad and Al Baker’s maple syrup stand might be in trouble since they didn’t own the land it was on. Leslie gives an “account” of what happened on the morning he was slain. I used quotes, because later it was discovered she wasn’t telling the whole truth and skipped some things that would put herself in jeopardy. She even implicates Kenneth Swedberg in the murder. Leslie spins another tale of how Chad was going to buy a green house. At first she claims they were not having financial difficulty but later her bank statement show dozens of bounced checks, so buying anything would prove to be a problem. They were found to be borrowing money to make their past due mortgage payments as well. Leslie gives several bogus “accounts” about the sale of the infamous Tikka rifle. After reading these four pages, how could she be trusted to give any account that could be used in court is beyond belief? 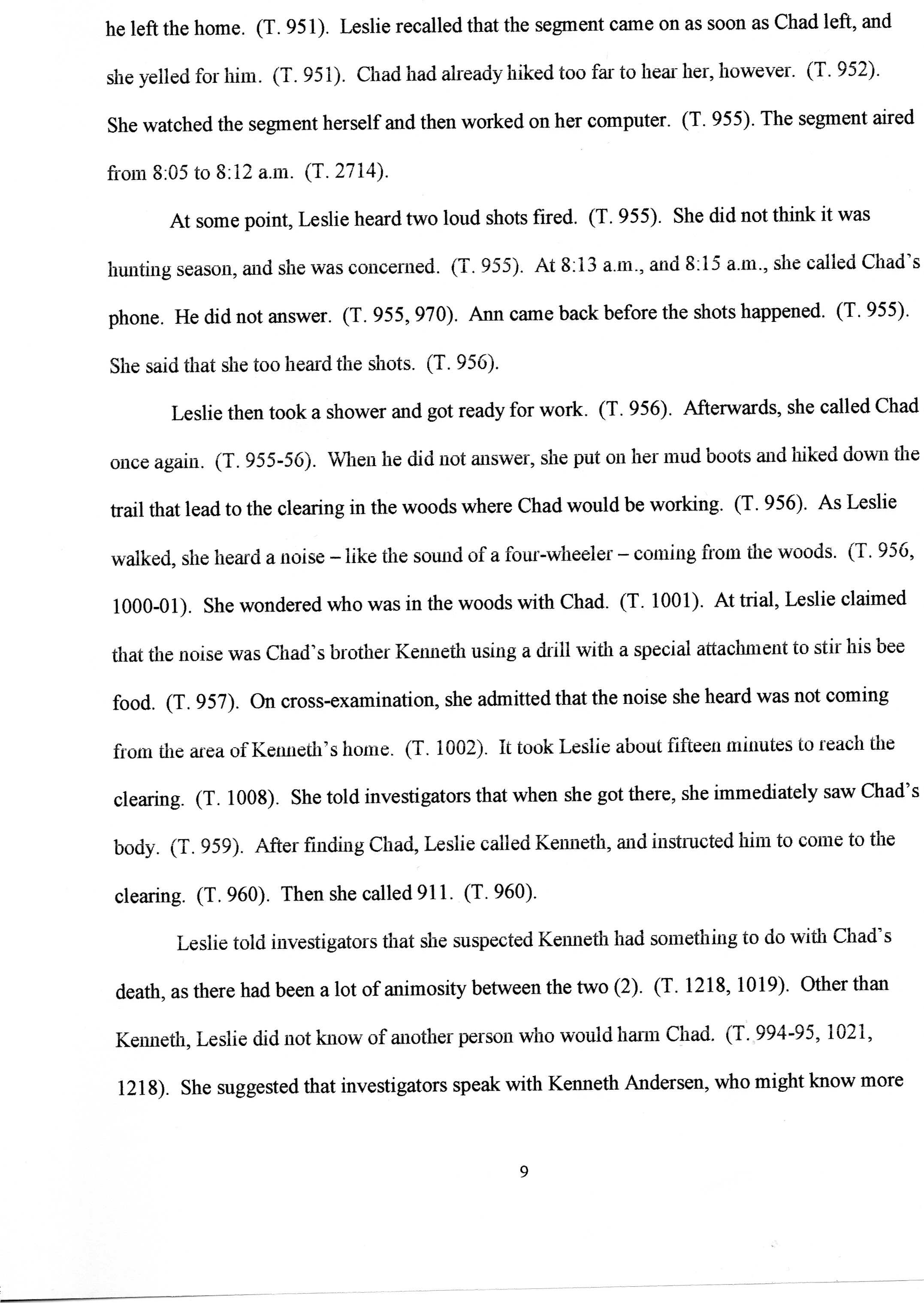 If you have read the latest petition telling how Ken Andersen was wrongly convicted for the killing of Chad Swedberg, you may have questions about whether or not these new claims can be backed up. They can and I will offer you proof. Here are some of the issues that caused the lies surrounding the prosecution’s case against Ken.

2. Page 292 also begins the DA’s response to the claim they were eavesdropping on Ken’s telephone conversation’s with his attorney, which is illegal. They emphatically deny they are doing it. Pages 293 and 294 continue their denial of these allegations. 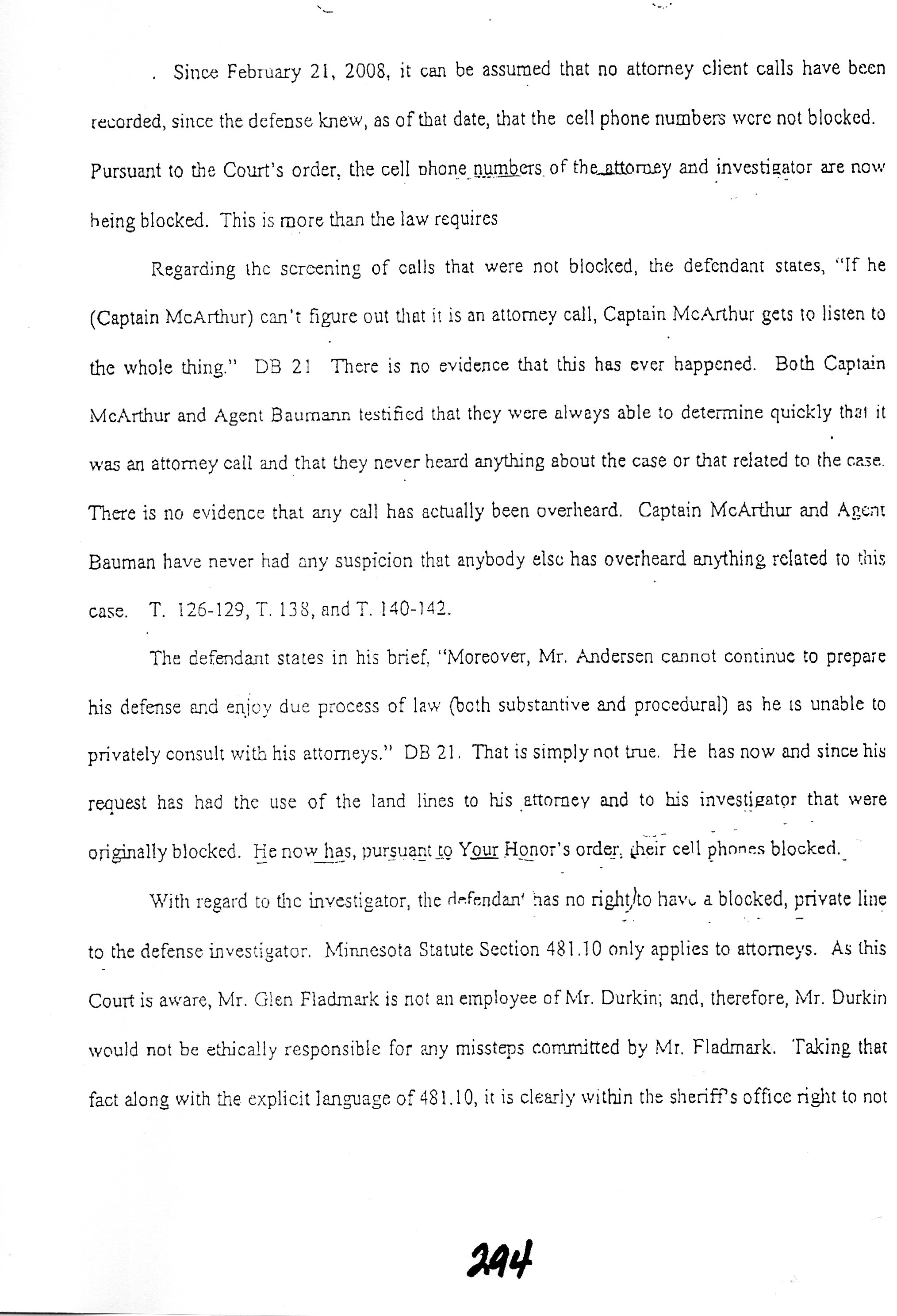 3. The next page is the DA’s response to Ken’s charge that key witnesses have been ordered not to cooperate with Ken’s investigator, which would help cripple his ability for a capable defense. The DA’s response is once again to deny they did anything wrong.

All of these answers by the Becker County DA have been proven to be lies. I will post proof of this and show that Ken Andersen did not get a fair trial and deserves to be retried or set free.  One thing that will be clear is that he is innocent of this crime and should not be in prison. He was definitely framed. I will post more on Wednesday, October 19.

Ken Andersen’s attorney, Zach Longsdorf, has recently filed a new petition asking the courts to grant Ken a new trial. This is the best narrative regarding Ken’s railroading at trial and tons of new evidence showing he didn’t kill his best friend, Chad Swedberg. Folks, this is explosive and needs to be shared. After all these years, I feel I have understood and tried to communicate his innocence as best I could. Zach’s petition is better written and more thorough than anything I have have been able to post on this blog. I am sharing it with all of you now and ask you read all of it. The White Earth community needs to know what happened and urge the courts to give him a fair trial or exonerate him and let him go home. The true killer is still out there and got away with this. The police need to find that person and make sure they get the right person this time. I am sharing this in two sections. The first is the Memorandum of Law for Petition Relief, which is 80 pages and tells the entire story of what went completely wrong with this injustice. I urge you to read all of it and share it with everyone you know. The second link is the outline of the petition and only a few pages. I think the White Earth community deserves to know the truth!

I urge all you readers to read this petition and encourage comments! Thanks to all of you for your support. Let’s continue to support Ken and see that he gets to come home.